Just like all of the other competitions and lists it is in need of a number and a name under the tab General.

Thereafter you go to the tab Score summary, where all of the settings will be found.

Rider/Horse
Choose if the point should be awarded only to the rider or the combination of rider and horse.

Only best result in each competition
Choose if a rider should be awarded a point for several results in one competition or only the best one.

Recalculate the rank
If you only choose to count the best result in each competition, and a rider has several horses in the competition the lower ranked horses will be skipped when points is awarded.

Example of how this works: 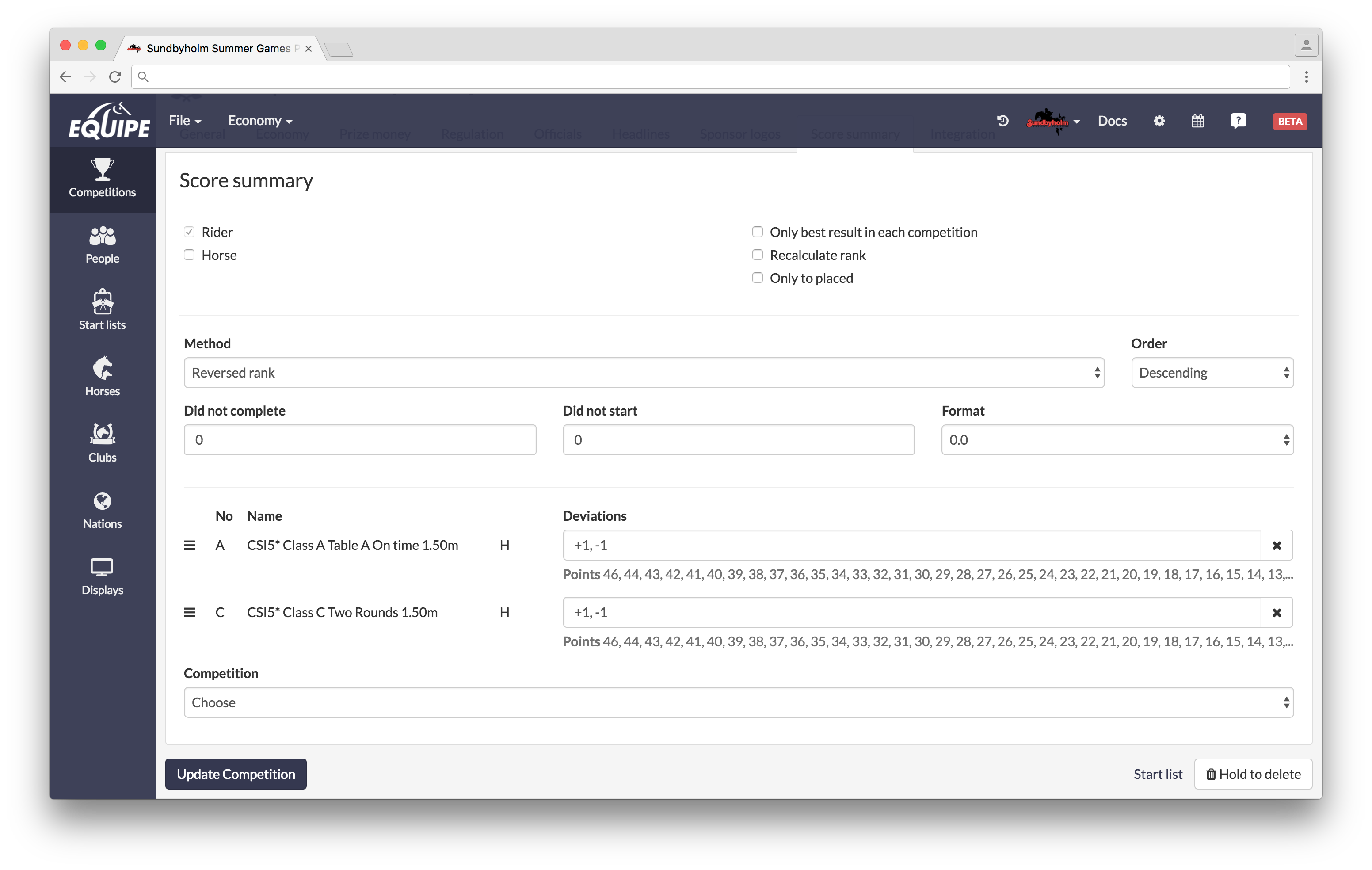 In the score summary above a rank 1 in any of the competition gives 10 points, second place 9 points etc. If a rider should be place both as number one and two the one being placed a third will receive 9 points instead if recalculate rank is turned on. If this would be turned of the third placed would get 8 points.

Only to placed
It only award points to rider(horse who have gotten prize in respectively competition.

Method
There are several different methods on how a score summary should award the points.

Percent
Is used in dressage, where the riders total percent in different competitions will be summarized.

Rank
Points will be awarded for a placing in each competition. A first place will give 1 points, second place 2 points etc.

Reversed rank
Works as Rank above, but a first place gives points according to the number of starts in the competition. If the competition have 54 starting, the first placed will be awarded 54, second place 53, etc.

Order
Specify if the list should be in ascending or descending order based upon the points awarded.

Did not complete
Specify the point which should be awarded a rider/horse who in any way did not complete the competition, e.g eliminated or retired.

Did not start
Specify the point which should be awarded if a rider/horse is not in one or several of the competitions.

Format
Specify if decimals should be used, and in that case how many.

To add competitions that should be included in the score summary you do this by choosing the competition in the drop-down list which could be found at the bottom.

Thereafter you can for each competition specify how many points that should be awarded, or deviation from the method chose for calculating the points.

When you have created the score summary and made all of settings you should return to the startlist and choose the new "competition".

Press on the bow up to the left to open the results registration and you will be able to see how the points have been awarded in the different competitions. This will be updated when the results from connected competitions is registered.

The score summary can also be published to online.equipe.com as any ordinary competition.